Let’s explore a code snippet from the POCO source code: 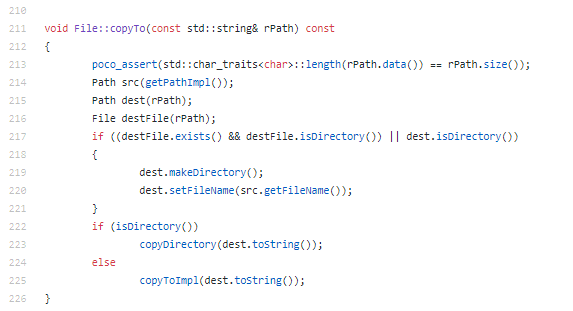 This implementation is characterized by:

If we navigate across the POCO source code we can remark the coherence of the implementation. The same best practices rules are applied to each function.

Let’s take a look inside POCO using CppDepend and discover some facts about its design and its implementation .

Robert C.Martin wrote an interesting article about a set of metrics that can be used to measure the quality of an object-oriented design in terms of the interdependence between the subsystems of that design.

Here’s from the article what he said about the interdependence between modules:

What is it that makes a design rigid, fragile and difficult to reuse. It is the interdependence of the subsystems within that design. A design is rigid if it cannot be easily changed. Such rigidity is due to the fact that a single change to heavily interdependent software begins a cascade of changes in dependent modules. When the extent of that cascade of change cannot be predicted by the designers or maintainers the impact of the change cannot be estimated. This makes the cost of the change impossible to estimate. Managers, faced with such unpredictability, become reluctant to authorize changes. Thus the design becomes rigid.

The idea behind this graph is that the more a code element of a program is popular, the more it should be abstract. Or in other words, avoid depending too much directly on implementations, depend on abstractions instead. By popular code element I mean a project (but the idea works also for packages and types) that is massively used by other projects of the program.
It is not a good idea to have concrete types very popular in your code base. This provokes some Zones of Pains in your program, where changing the implementations can potentially affect a large portion of the program. And implementations are known to evolve more often than abstractions.

The main sequence line (dotted) in the above diagram shows the how abstractness and instability should be balanced. A stable component would be positioned on the left. If you check the main sequence you can see that such a component should be very abstract to be near the desirable line – on the other hand, if its degree of abstraction is low, it is positioned in an area that is called the “zone of pain”.

Only the Fondation project is inside the zone of pain , it’s normal because it’s very used by other projects.

Multiple inheritance increase the complexity and it’s better to use it carefully.

Let’s search for all classes with many base classes.

Only few classes derived from more than one class. NUMBER OF LINE OF CODE

Methods with many number of line of code are not easy to maintain and understand, let’s search for  the methods with more than 60 lines. METHODS WITH MANY VARIABLES TYPES WITH MANY METHODS AND FIELDS We can say that POCO is well implemented, few methods are considered as complex, the types are simple with few methods and fields and it’s well commented.