Static analysis is not only about directly finding bugs, but also about finding bug-prone situations that can decrease code understanding and maintainability. Static analysis can handle many other properties of the code:

Code smell can be also considered as a bug-prone situation, here’s it’s definition from wikipedia:

Many interesting tools exist to detect bugs in your C++ code base  like cppcheck, clang-tidy and visual studio analyzer. But what about the detection of the bug-prone situations?

If the static analysis tools creators could decide which situations are considered as bugs, it’s not the case of the code smells cases which depends on the development team choices. For example a team could consider that a method with more than  20 lines is complex, another team could define the max to 30. If a tool provides the detection of the code smells , it must provides also the possibility to customize it.

Static analysis is the idea of analyzing source code  for various properties and reporting on those properties, but it’s also, philosophically, the idea of treating code as data.  This is deeply weird to us as application developers, since we’re very much used to thinking of source code as instructions, procedures, and algorithms.  But it’s also deeply powerful.

After the source code analysis of a source file, we can extract its AST and generate a model containing  many interesting data  about the code. This way we can query it using a code query language similar to SQL.

CppDepend provides a code query language named CQLinq to query the code base like a database. Developers, designers and architects could define their custom queries to find easily the bug-prone situations.

With CQlinq we can  combine the data from the code metrics, dependencies, API usage and other model data to  define very advanced queries that match some bug-prone situations.

Here’s an example  of a CQLinq query that matches the most complex methods: 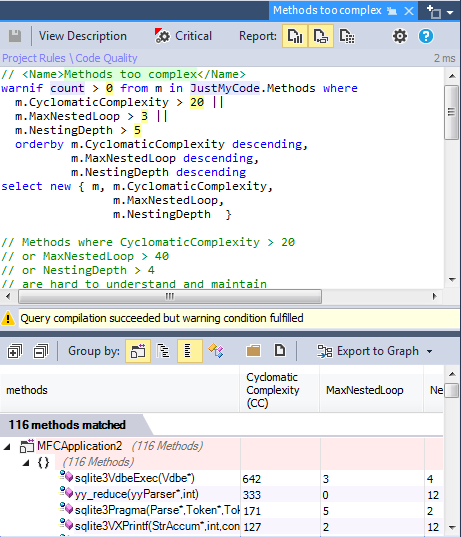 It’s better to combine many C++ tools to detect some problems in your C++ code base, some tools detect bugs, some others detect also the bug-prone situations .With CppDepend we try to combine between many tools, indeed we provides an easy way to define your queries, but also we can import  the result from other static analysis tools to query them with CQLinq.