Let’s discover which solution Doxygen uses, to optimize its memory usage and avoid the thrashing problem.

Doxygen is the de facto standard tool for generating documentation from annotated C++ sources, but it also supports other popular programming languages such as C, Objective-C, C#, PHP, Java, Python, and many others. Thanks to Dimitri van Heesch for his great effort to develop and maintain the project.

Doxygen takes as an entry the source files, parse them to extract the needed data and store the result in class instances of kind DirDef, FileDef, NamespaceDef, ClassDef, and MemberDef. All inherit from the Definition class .

For some projects store, all these instances in memory will impact the system performance, and the generation of the documentation could take many hours.

Doxygen uses a solution based on the cache, using a cache is a popular way to optimize your memory usage. The idea is to store in a cache the data needed to be in memory; this cache will contain many slots, each one containing a specific piece of data, and some slots will be released if the cache size exceeds a certain value. The data released will be present on disk, and if we need them again they will be moved to memory.

Doxygen defines the ObjCache class which is a linked list of CacheNode class, this class is responsible to add and remove instances from the cache. 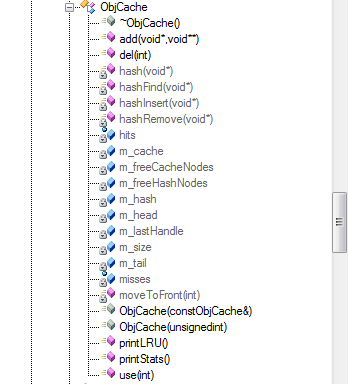 3-The algorithm to release entries from the cache 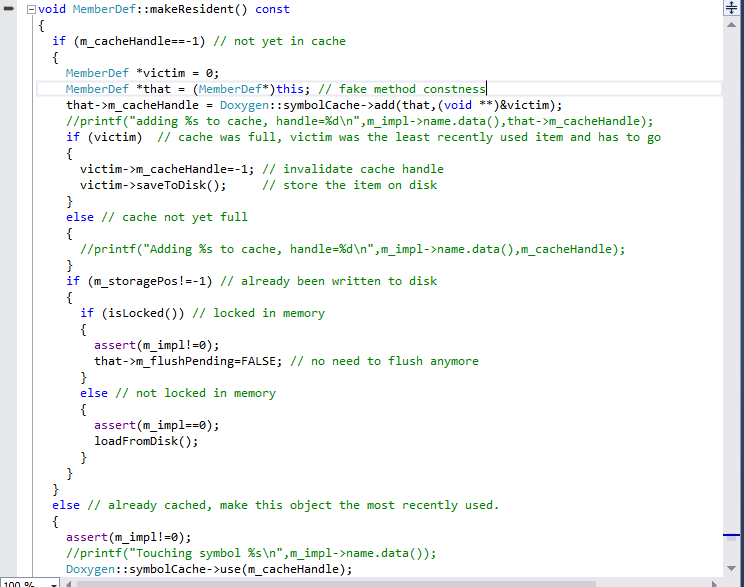 Before using Clang as C/C++ parser for our product, we used Doxygen as a parser for our first version, we did many tests on cache size, when we disabled  the cache and  parse some C++ projects with this modified version, the parsing time has much increased, sometimes from 5 min to 25 min. For big projects it takes hours and it impacts a lot the system performance.

Using the cache is a powerful solution to increase the performance of your application if you use a large amount of data. Discovering how the open-source projects implement the cache could be very useful to understand how to implements it in your applications.