Every project has its own style guide: a set of conventions about how to write code for that project. Some managers choose basic coding rules, others prefer very advanced ones and for many projects, no coding rules are specified, and each developer uses his style.

It is much easier to understand a large codebase when all the code in it is in a consistent style.

We can also work with an expert for few months to elevate the coding skills of the team. However, it’s not easy to find the right person and it could cost a lot of money to the company. But why searching for an expert, if we can be inspired by genius developers like Linus Torvalds. Indeed, you have just to explore the source code developed or maintained by him to have a good idea of how we must develop an efficient C code.

Linus Torvalds is genius because it’s the creator, and for a long time, principal developer of the Linux kernel and he also created the most popular distributed revision control system Git. That’s it, no need to search for other arguments 🙂

Inside the git source code

Let’s take a look at a code snippet from git: Here are some remarks about this code:

If we navigate across all the git source code we can remark the coherence of the implementation. The same best practice rules are applied to each function. To be sure let’s  search for the static functions:

The treemap is very useful to have a good idea of code elements concerned by a CQLinq query, the blue rectangles represent the result.

Almost all functions are declared as static to be visible only in the translation unit where there are declared.

Inside the Linux kernel source code

Let’s switch to the Linux source code and take as an example this function implementation: 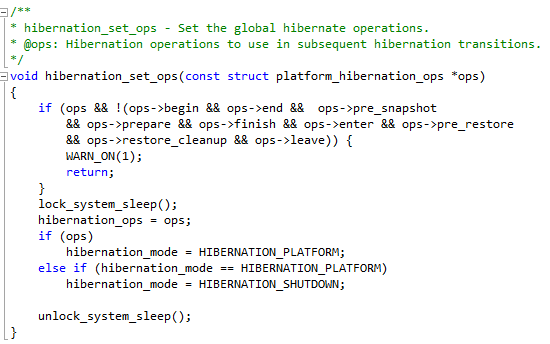 The coding style has a big impact on the source code readability, investing some hours to train developers, and doing periodically a code review is always good to make the code easy to maintain and evolve.

Let’s go inside the Linux kernel source code using CppDepend and discover some basic coding rules adopted by their developers.

Modularity is a software design technique that increases the extent to which software is composed of separate parts, you can manage and maintain modular code easily.

For a procedural language like C  where no logical artifacts like namespace, component or class do not exist, we can modularize by using directories and files.

In case of the Linux kernel, directories and subdirectories are used to modularize the kernel source code. 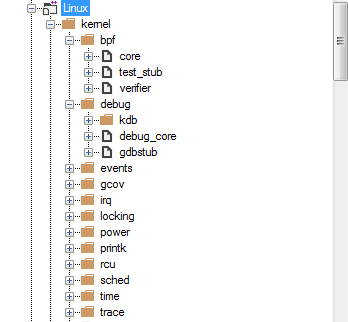 We can use the Metric view to have a good idea how many functions are concerned. In the Metric View, the code base is represented by a Treemap. Treemapping is a method for displaying tree-structured data by using nested rectangles. The tree structure used in a CppDepend treemap is the usual code hierarchy: 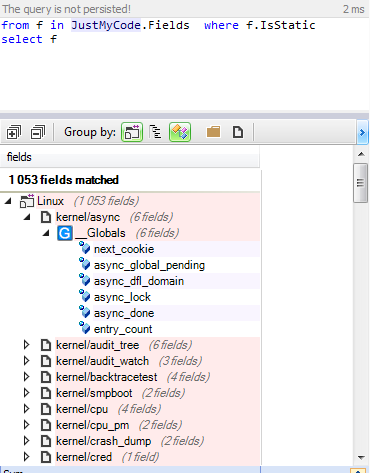 In the Linux kernel source code, the encapsulation is used whenever the functions and variables must be private to the file scope.

In C programming the functions use variables to achieve their treatments, these variables could be:

Each project has its data model which could be used by many source files, using global variables is a solution but not the good one, using structs to group data is more recommended. 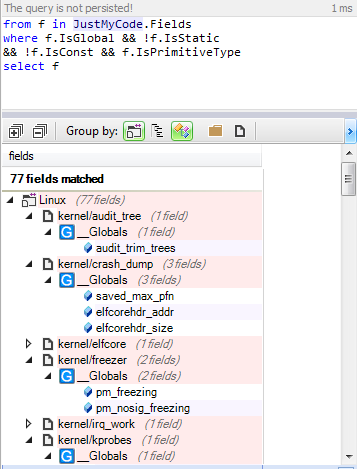 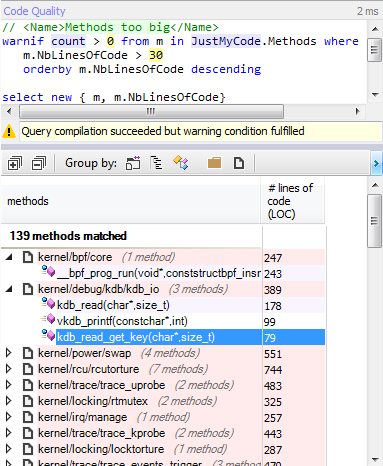 Only a few methods have more than 30 lines of code.

Functions where NbParameters > 8 might be painful to call and might degrade performance. Another alternative is to provide a structure dedicated to handling arguments passing. 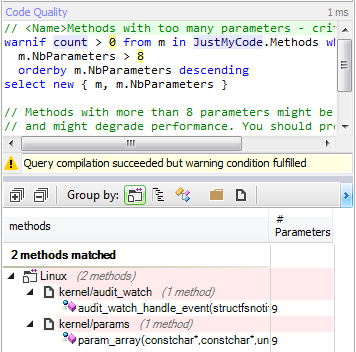 only 2 methods have more than 8 parameters. 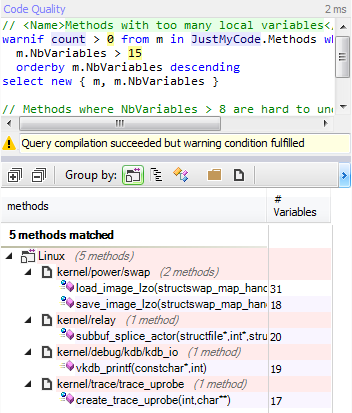 only 5 functions have more than 15 local variables.

The max value tolerated for these metrics depends more on the team choices, there are no standard values. 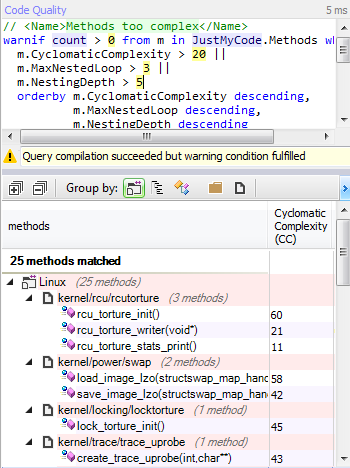 There’s no standard for the naming convention, each project managers could choose what they think it’s better, however, what’s very important is to respect the chosen convention to have an homegenous naming.

In case of Linux, the structs must began with a lower case, and we can check if it’s true for the whole kernel source code, let’s execute the following query: 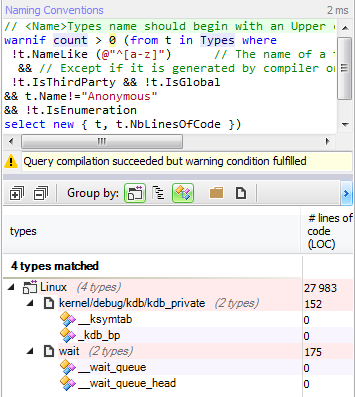 Exploring some known open source projects is always good to elevate your programming skills, especially if they are developed and maintained by experts. No need to download and build the project, you can just discover the code from GitHub.